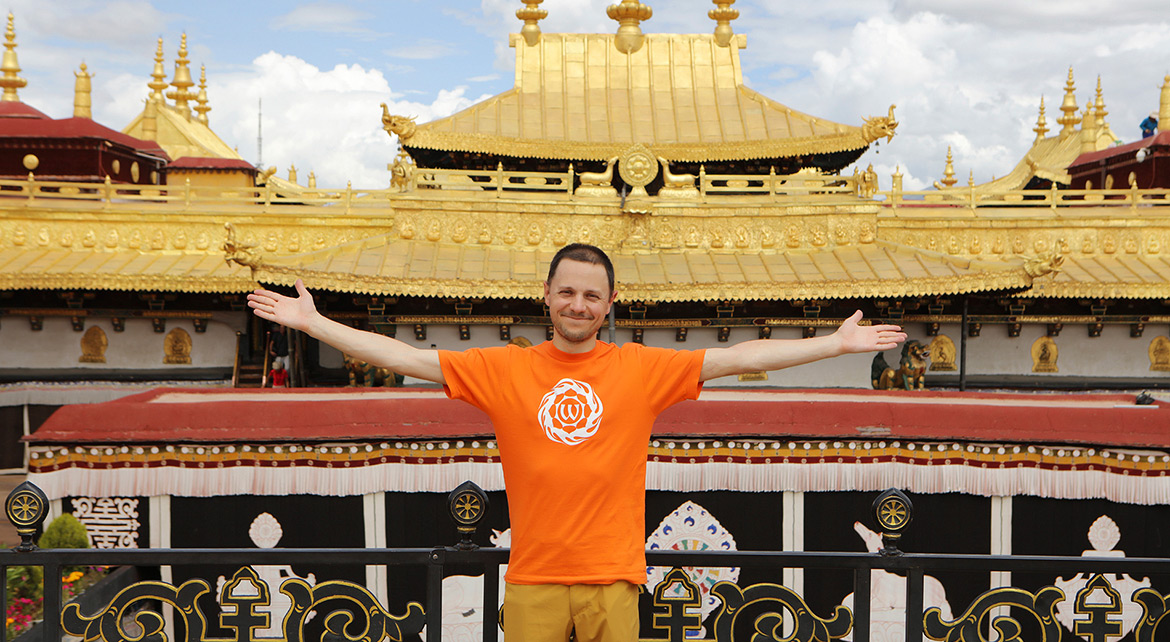 Traditionally our travel across the Tibet begins with visiting Samye monastery. After the city and the airport this site shifts us to completely another rhythm of life, literally leading out of the ordinary. Samye is the first monastery, in which Buddha’s doctrine about the enlightenment has found a new life on the Tibet territory. Surrounded by these walls that absorbed the energy of practice during many centuries we feel the calm. Under even sounds of sutras the attention in itself is switched to the internal contemplation and gradually a pacification there comes. From a small hill, the monastic complex looks as a fantastic mandala, so harmonious, as if it has been created by hands of the divine architect. Here, in Samye, we begin our pranayama practice and mantra Om readings to help body and mind high altitude adaptation. And already the next day the feeling, that you have arrived whence or go somewhere vanishes, because you already are in space of travel through the ancient country of snows.

Ahead is our first ascension to the Chimpu cave; it is one of the practice sites of great Guru Padmasambhava, grace to whom the Buddhism has affirmed in the Tibet. Like an eagle nest, the Chimpu rises at Samye valley; from its highest point the colourful valley panorama opens. Climbing to a cave at a height of more than 4000 meters requires certain efforts and patience. For me first of all it was not just physical efforts, but rather those thoughts that appear, when these efforts deduce you leaving your comfort zone. Here, in high mountains, where there is no place for passions and nothing distracts, appears a possibility to learn yourself better :)

Here is the top of the platform and the last steps to the cave. When I enter in, each time I get a reverential feeling. Therefore, without any pretence, I prostrate three times at the entrance. Staying some minutes inside, reading mantra or simply keeping silence in order to pacify your mind, as though to block external disturbances. You intuitively feel a presence of a great force. After you get out of the cave the sun shines over the nearby slopes and caves, where the monks still retire for the personal practice. So, the first stage of the travel is passed! Our further path leads us to Lhasa, the ancient capital of Tibet.

After two-hour journey Lhasa the capital of Tibet appears. First of all, Lhasa is known for the Potala palace, where numerous dalaï lamas, spiritual masters of all Tibetans, carry out their practice, inspiring people worldwide. Each time Lhasa meets us with the motley scale of paints and sounds. The city in which high technologies and ancient customs are weaved, which is typical for all Asian cities, but in its own and unique way. Around the capital the set of monasteries and temples is concentrated. First of all, our stay in Lhasa is sated by visiting these seats, we can see here less tourists and more practitioners, aspiring to touch places of force, sources of ancient knowledge.

To my opinion, after visiting the monasteries it is very important to keep positive impressions to help us holding the way of progress in consciousness. I always try to look deeper, through modern superstructures, through shabby walls worn by the time to make out an essence and to understand, what way ancient masters have passed through; what experience they have got and what they wished to share with us.

Winding mountain road led us to the cave complex of Drak Yerpa. Right on the bus stop rise up two huge white stupas, the symbols of the enlightened mind. The stupas have been made accordingly to the "golden" proportions. I always liked the stupas, even before I found out that they were beneficial for the surrounding space. This is due to the relics and pious wishes of people making traditional practices: bypassing the stupa in a clockwise direction (called "kora") stored inside. Later, I climbed upstairs, to the caves. On the surrounding slopes I have noticed a dozen different size stupas, connected by narrow trails. Our guide told us that all these stupas had been built by local people as a sign of respect to great personalities, such as Padmasambhava, Atisha and the Dalai Lamas, who practiced here.

Climbing up was shorter than it was in Chimphu. Causeway leveled across the mountains, connects a number of caves that are approximately at the same height. Likewise the yogis appreciated the place of practice of their predecessors, thus have settled in the proximity. Or maybe this place is just favorable for meditation? This was our second journey for today. Joyful Surya generously shared the warmth, and a lot of guys were tired after getting up, I had slightly rustled head. Although, as it have turned out later, when everyone has gathered together, after a visit to a particular place (apparently it was Padmasambhava’s cave), a headache has disappeared for most of them. Different caves leave different impressions. You can be convinced of that only by your own experience staying focused and listening to the inner. Also it depends on the concentration skills and karmic connection with the place and the masters who had practiced there in the past. Who knows, maybe, we have already been here once? :)

Before going down, I watched again the multitudinous green valley below. It remains a sense of visible and invisible harmony in the surrounding space. I have visited this place for the first time and want to come back again, to feel it better. It is with this thought that I am leaving Drak Yerpa, with the hope to come back here again.

Our journey is approaching to the end. We have left behind a travel to the Tibet, visits to the monasteries and places of power, acclimatization. We still have ahead a kora around the Mount Kailash, which is a respectful pilgrimage around one of the most sacred places of our planet. Worthily of noticing that in this kora not only the body but particularly the mind will be exercising. For a while, all everyday concerns have been left behind, our group became friendlier, "sharp corners" were gradually smoothen out, and common energy has been generated being strived towards the mutual goal: an appointment with Kailash. Everyone is looking forward for something from this trip. But most importantly, these are the changes that occur in the inner world of each of us, and how they manage to be understood. The different kind of external energy and influences can only give evidence of what we already posed inside us. On the one hand, it is the energy of sacred places, on the other - penance, which fulfils our journey, and which often lacks city dweller :)

At this time, Kailash greets us sternly; at the entrance to Darchenu, аpoint of the route, it is wrapped up in gray clouds, hiding his face from travelers. The clouds stay on the sky even in the morning. It begins a little rain, but strong and equipped for all occasions, we are ready to for moving out. An old Chinese proverb says that starting the way in bad weather is a good sign :)


Gradually, everyone finds out the rhythm of the movement. Despite the bad weather, everything fascinates in the valley, and the mist adds new shades. Almost everyone overcomes without much difficulty the first stage of the path (about 15 kilometers). The weather is getting better, but Kailash is still hidden behind the clouds, and just in front of the North face it becomes slightly opened to the eyes; by 14.00 o'clock are approaching the North face, ready for new austerity. This year, abundant rainfall has dropped in the region, thereby closer to the glacier, we find a lot of snow and streams. As a rule, the rise is a serious austerity, but another issue is surprising. Every time we go up to the North face, the weather calms down. Kailash opens for some time in all its greatness, and, while our approaching, it takes all the space ahead.

Different levels of height have its particular landscapes: the boulders are alternated by small lawns of low grass; then the entire surface is covered with smaller stones remaining after mountain snowmelt; finally it is followed by a glacier covered with small pebbles and sand. But always, in the middle of the gorge runs the river, generated by streams at the foot of Kailash, punching bizarre channels in the glacier and among the rocks in order to be connected with the bottom of the larger streams flowing into the Rakshasalake. The last hundred meters on the snowfield are difficult as it is difficult to breathe on this height. I walk slowly, from stop to stop, slamming my shoes, punching the trail in virgin snow and stopping every few steps to catch my breath. The wall of overhanging Kailash occupies the entire sky.

Finally, I have managed to straighten me up and to catch up my breath; and, to take a look on a snow-white valley below, the slopes of the mountains and the North face of Kailash. It was calm. Again, incredible calm was everywhere. I am sincerely grateful to all the Gods, Bodhisattvas and Buddhas for this blessing, all the invisible hosts of these places, which allowed me to be here again. For sure, you need to have a good karma and a good supply of tapas to get to these places. However, it is the austerity that helps us to grow up in the future, to see and understand the lessons and the tasks that we set to ourselves, in terms of development, and not for the sake of momentary pleasures and material goods. Having made a triple stretches as a sign of respect to Kailash, I have started the downhill walk. At the beginning, the descent went easily, but after today austerity the body sends signals about the necessity to have a rest: the head is buzzing head, my legs are weak. In the middle of the descent the rain has started, lately it has turned into a downpour. A roof, a warm dinner and a rest were waiting for us in the guesthouse; we shared the experience with friends and analyzed the day we have lived out. Thank you Kailash! OM

To join the tour, please fill out the form below. All fields are required. If you do not receive a response from us within the next business day, please contact us directly.